Synopsis
When the right space pilot walks into his bar, a desperate bartender uses all his wiles (and tentacles) to talk the man into business and his bed--but the spacer is still enslaved by his past and isn't sure he can deal with a two-handed lover, much less one with six.
As the supply shipments stop coming, Teo Houdin needs all his tentacles to keep his waystation bar open. Facing a riot by thirsty miners stranded in the backwater of the galaxy, Teo helps a greenie space pilot buy a ship in return for a regular haul of liquor. But he longs for the courage to invite the enigmatic spacer to fill his lonely bed as well. Still smarting from his newly implanted navigational ports, Jimenez knows owning his own ship will prevent him from ever being bought and sold again. For a former slave, transporting cargo through the emptiness of space sounds like paradise, but after meeting the compassionate and sexy Teo, his heart feels empty, too. At the edge of the galaxy's spiral arm, can Teo convince Jimenez that the heart has its own tentacles and theirs should be entwined forever? [embed]https://www.youtube.com/watch?v=H229qJVykQ0[/embed] 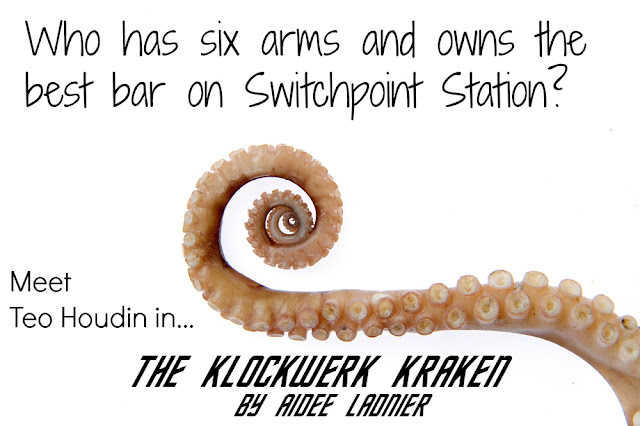 Excerpt
Jimenez opened the bar’s airlock and the urge to run out again washed over him like a splash of cold water. He commanded his frozen legs to shuffle forward and inside. This could turn ugly if he lost his concentration for even a moment. But he wouldn’t. He’d been practicing, becoming accustomed to groups larger than this for revs now. He could be just like everyone else. None of them would see the scars on his back or the brand of his tattoo that had marked him since puberty. Men and women filled half the tables and booths, some laughing and drinking, a few puffing blue smoke. The gaming tables on the side were empty, while a lone player at the billiard table opposite pocketed ball after ball. The room rang with loud voices, clinking glasses, and raucous music. Jimenez slid into an empty spot at the pale stone bar and caught sight of the clearest, happiest eyes he’d ever seen, a shade lighter than the man’s tousled brown mop above. A dimple quirked at the side of his full lips, mesmerizing Jimenez. The loud voices behind him slid away and for a moment, it was quiet in his mind. Jimenez flinched when his shoulder was jostled and the spell broke. “Hey, you okay, buddy? First time? What can I pour for you?” Jimenez blinked, realizing the tall bartender was speaking to him. The man’s smiling eyes crinkled at the corners of his bronzed face. Jimenez swallowed, and he ducked his chin, trying not to stare again, trying to hide his hot cheeks. He’d never been so close to such a handsome man. “Did you want a drink?” The bartender quirked an eyebrow. “Yeah… I mean yes. Whiskey neat.” His voice came out gruffer than he expected. “Bourbon, Scotch, Rye…?” “Surprise me.” It was a game Jimenez played. He’d order whiskey and discover what the bartender served. If he reached for the rail bottle closest to hand, it meant he would pour either the cheapest or the local favorite. If he pulled something from the top shelf, the bartender angled for a bigger tip. But if he grabbed a decanter off to the side or behind another bottle, he’d score the bartender’s personal pick. “Coming right up.” The bartender raised a tentacle in greeting, calling out to another patron. Oh, God. The man was a Pod. Of course he was. In a joint named the Klockwerk Kraken, who better to tend the bar than a tentacled man?

I very rarely read Sci-fi book but this one caught my eye, so what did I think?

It's a very easy to read MM book but it does delve into a difficult subject, Slavery.

Teo is a pod a gm human, he looks as any other human except for his extra tentacles! His a fab character light, fun and wears his heart on his sleeve, I couldn't help but like him. Teo runs a bar and that's were he meets Jimenez.

Jimenez, calls in for a drink it appears his looking for a ship, lucky for him Teo can point him in the right direction. Jimenez is a little more closed off, he has his reasons. Can Teo break through and help him.

I liked how they developed their relationship, the comm system made for fun interactions. The comm system also introduced us to Teo's family, they made me laugh.

I'd definetly read another book from thus author.

So why Tentacles?
By Aidee Ladnier

By now everyone is probably aware of my fondness for tentacled science fiction heroes. I even have one, a bartender named Teo whose extra appendages come in mighty handy on a busy Friday night. He debuted in my book The Klockwerk Kraken.

But when I mention my hero, I generally get one of three reactions:
Ewwww!
Cool.
Why?
Let's address the first one. The Ewww! Factor probably arises from the visceral reaction to a creature so alien to oneself. After all, octopuses, squids, and cuttlefish have no bones; they live at the bottom of the ocean; and they have lots of arms--like spiders (another phobia-inducing critter).  On top of that, octopuses are really smart—way too smart for something with a squishy body. These animals are problem solvers. But a lot of people focus on the tentacles. They must be slimy since they're under water. They can reach out and grab you. They have suckers on them that attach to you and don't let go. But think about the hugs all those arms can give! There’s nothing Ewww! about hugs, right?
The second reaction I usually get is—Cool! I like that one. I’m partial to the coolness of tentacles myself. ;) Really, when you think about it, wouldn’t a few extra arms come in handy when you’re say, carrying in groceries? Imagine being able to reach all those things on the top shelf that are just out of reach of your regular arms! Or being able to squeeze a tentacle into that pesky too small water bottle to wash it. And then the last one, why? Well, for this story, it really comes down to a panel I attended at RainbowCon 2014. The panel was on the subject of taboo. And tentacles are at the forefront of taboo subjects due to the resurgence of Japanese anime and something called “tentacleporn”. Really, the Japanese have been interested in tentacles since the 1800s when a book of erotic art included the image named “The Dream of the Fisherman’s Wife.” It is precisely because of the alieness of the Eww! factor that many people are intrigued by tentacles in a sexual manner. The panelists encouraged writers to step outside their normal prose and write something a little different, a little out of the ordinary. So I chose tentacles. I don’t think they are necessarily the sexiest thing about my hero, but even he admits that intimacy with him is adventure--it’s sex outside the normal two arms and two legs. So my challenge to you is to step outside your comfort zone as well. Try reading my story The Klockwerk Kraken and see if you might be intrigued by a few tentacles.

About the Author Aidee Ladnier began writing fiction at twelve years old but took a hiatus to be a magician’s assistant, ride in hot air balloons, produce independent movies, collect interesting shoes, and amass a secret file with the CIA. A lover of genre fiction, it has been a lifelong dream of Aidee's to write both romance and erotica with a little science-fiction, fantasy, mystery, or the paranormal thrown in to add a zing. You can find her on her blog at http://www.aideeladnier.com or on her favorite social media sites:

GIVEAWAY CENTRAL
Coloring Contest
Aidee is holding a Coloring Contest!! Visit the link below and download one of her coloring sheets and upload it once you have finished coloring for a chance to win a $25 Amazon Gift Card plus a signed LIMITED EDITION of the Klockwerk Kraken. So get some crayons and grab the kids because the more you enter the more chances you have to win.
http://www.aideeladnier.com/2015/01/coloring-contest.html

a Rafflecopter giveaway
Posted by Tracey's Vampy and Racey Book Blog at 12:28

Temptation: Reckless Desires
by Anna Lowe
Janna met Cole in book 1 and it was obvious she liked him, but his a human so there's no future there not if she wants peace, as the pure blood squad always seem to be about to spoil someone's happiness. Jess and Simon from book one are...

When Time Falls Still
by Brenda Margriet
I loved this book, I haven't had much time to read this week and have been desperate to continue this book, it's a gentle but passionate romance with added suspense that pulled me in. Charlotte works at the university teaching English a...

Zane: The Decrees
by Elaine Barris
Zane book 2 More Zane baby!!! London and Zane have been together a couple of years now, they're blissfully happy and still very passionate about one another - if she was human, she would be sore, as would he lol but they are vampires s...

Merry "Chris" Mas [Love Play Matchmaking Service 1]
by Clare Dargin
It's Christmas time and Chris is feeling a little lost, his sister decides to join him up to a dating site... The author does a great job introducing us to all the characheters separately, but when they meet up they become even better,...

Wolf's Blade
by Clare Dargin
Callum is out searching for the packs rogue member, when he hears a she wolfs mating call, it reachs all parts of his body, he returns the call pleasing the she wolf. if life was simple they would meet fall in love and live happily ever ...

Have you given Audible a try?